What a Difference 70 Years Makes

70 years ago this week, in the midst of a Nazi Occupation, the citizens of Warsaw decided to make a break for it and started an uprising.  As futile as the initiative was, it was a symbol of heroism and bravery that showed the world what Polish people are capable of when their backs are against the wall.  Such heroics would not bear fruit until 1989.  If you ever are in Warsaw, I strongly recommend the Warsaw Uprising Museum.   And at 5pm every August 1st, all activity stops for one minute in the city to give recognition to those brave patriots.  After the devastation where by 1945, the Nazis destroyed over 80% of the city, Warsaw today is telling a different story.  It is a vibrant city with skyscrapers and a developing startup community.  I had a chance to go up to Warsaw, Poland’s national capital, last week. And I did some exploring for the startup community up there.  And the following is a report of what I found.
There has been an on-going rivalry between Krakow and Warsaw going back to when the capital of the kingdom was moved to Warsaw in 1569.  Before that the seat of the government was in Krakow.  However, Krakow remains the cultural capital of the country.  There might be an intra-city hatred between the two football clubs in Krakow.  They can, however, agree on one thing, Legia from Warsaw is evil.

A couple of differences

There are a number of differences between the startup communities of the two cities.  In Krakow, most of the startups, incubators, accelerators, and co-working spaces are located within walking distances of each other, in Warsaw they are scattered throughout the city.  In Krakow, the startups have many meetups and people form the different startups socialize with one another for fun, the startups in Warsaw remain more to themselves.   And geographically, Warsaw is quite a bit bigger than Krakow.  Of course, since Warsaw is the capital, the infrastructure is more developed and focus of the Polish government tends to be there.  Krakowians tends to have a more little brother’s mentality towards Warsaw.

Reaktor, founded in 2011 by Borys Musielak, Anna Walkowska, and Wiktor Schmidt,  is a place for Warsaw-based startups and freelancers to work, collaborate and network. The unique creative atmosphere of Reaktor is what brought startups and freelancers to join the venue in the first place. You get a 24/7/356 desk, super-fast internet (provided by Ciscoand ATMAN) and a breeze of creative atmosphere to make sure you are as efficient as it gets!
Some other perks include:
On monthly OpenReaktor events they open up Reaktor inviting interesting speakers and gathering the whole Warsaw startup scene in one place to network.  I liked the space.  I like how people from different resident startups are so friendly with each other and even eat together.  However, I believe some renovation could help spruce up the place.

One of the resident of Reaktor is Radgost is a web lab that develops SaaS solutions like:

Among their thousands of customers are: Microsoft, WP.pl, Onet, Pepsi, and Carrefour 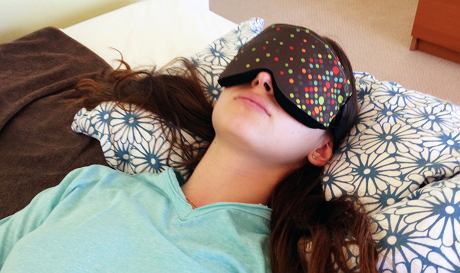 I met the founder of Intelclinic, Kamil Adamczyk at Bitspiration a few weeks ago.  He invited me to visit their new place when I am in Warsaw.  Kamil just received his degree from the Warsaw Medical University.  Intelclinic has just finished their Kickstarter campaign where they raised close to half a million dollars.  They just moved into their new officies in north Warsaw.  They have a sleep lab on-site.  They are the developers of the NeuroOn sleeping mask.  This mask is set to revolutionize the way you sleep.  With sensors on the mask, it will monitor your sleeping cycles and help you maximize the effectiveness of your rest.  It will use some gentle bits of light to help regulate the release of Melatonin as you sleep.  The mask can be used by people with certain sleeping disorders or simply people who could suffer from jet lag.  Kamil recommends that the mask be used during the whole journey and when you return as well.  At the moment, they would like to release the mask to the mass market.  Clinical trials is set to go underway at a major medical center in the US.  They hope to make the mask a medical device in the future.
Showroom

Polish fashion labels have already gone global.  Misbehave is a Warsaw based fashion label that can be found on Rhianna, Ellie Goulding, and Azealia Banks.  They are the ones that helped to make the simple black and white block lettered athletic wear, tshirts, and sweatshirts all the rage among the trendy these days.   Showroom would like to push it even further.  They are located in an old factory in downtown Warsaw.  They are a hub which would like to provide many starting Polish fashion designers exposure to the local market, sort of like an Etsy.  Recently, along with partnerships with some German periodicals, would like to make that exposure globally.   They curate their offerings based on current trends in fashion.  They have a requirement that all pieces of clothing and accessory must be designed and manufactured in Poland.   When you order from Showroom, you are getting the merchandise directly from the designer.

This is an organization for scientists, technicians, IT specialists, and students who has great ideas or results from their scientific works from Warsaw Polytechnics.  Their goal is to help prepare these ideas and projects for the mass market.  They want to connect the founders to the marketplace and funders.  The institute will help with some of the legal issues such as copyright and patenting.  Currently, they are making contacts with investors and other business leaders.

Thank you for reading another one of my posts done just for you!  If you liked what you read please share it by using one of the buttons up top and check out other posts in this blog.  I don’t want you to miss out on future posts so please follow me on Twitter @Eurodude23.  If you haven’t done it already, please like my fan page by clicking here!  See you next time!
Posted by KSUP at 8:54 AM