Torun is a moderately sized city of around 250,000 people in central northern Poland, known to Poles for its lovely gingerbread.  Torun is a UNESCO heritage city (like Warsaw and Krakow) which are also on the River Vistula and boasts a 500 year innovation heritage thanks to its most famous citizen, the polyglot astronomer Copernicus who was born there. Heliocentricity rocked the world’s belief system as long ago as 1543...

Torun is also the site of a budding startup ecosystem.  We will be talking to Patrick L Young.  Along with his wife, Beata, they launched the initiative Mission ToRun two years ago in an effort to help the local community get to the next level.  Later this spring, they will be involved in StartupBootcamp Fintech FastTrack in Warsaw.

Welcome Mr. Young.  Please tell the readers a little about yourself. Thank you Paul, I have been an entrepreneur since my teens, originally running motor races for old cars in my native Ireland. For many years I have been a specialist in finance and I have done a lot at the intersection of the future of finance and technology - including some 21 years of web e-commerce through multiple activities. That said I have also been involved in media, horeca and multiple other sectors over the years while my travels have taken me all over the world. Beyond my core entrepreneurial activities, I am an active investor as well mentor/board member and adviser.


One of my most recent startups, Exchange Invest (Http://ExchangeInvest.com) has become the ‘must read’ daily publication in financial market infrastructure. It’s on target for the equivalent of a million Zloty revenue after nearly 2 years which is pleasing for what started life as a sideline for our advisory practice.

My wife, Beata, is a serial entrepreneur who created the IgersTorun community and runs the local Geek Girls Carrots Group. Together we run HanzaTrade (Http://HanzaTrade.com), a community crowdfunding platform while Beata operates her own businesses including the tech-oriented Hanza Cafe (Http://HanzaCafe.com).

What made you want to start Mission ToRun?  And please give us an introduction to the initiative.

Mission ToRun was inspired originally by the “Open Coffee” initiative and has grown from there. Kujawsko-Pomorskie is under 60% of the EU GDP average, it has a massive talent pool from universities but a paucity of opportunity. Local entrepreneur Maciej Mikulski made the suggestion and Beata and I took up the cudgels of trying to create a more entrepreneurial culture in Torun and the region.

We are a grassroots movement seeking to help startups and small business in any sector, to develop and prosper, using our global network and extensive expertise.

Our monthly meetings have involved speakers from all over the world discussing all manner of facets of startups and entrepreneurship - please view our videos on the Mission ToRun YouTube channel.


You could have chosen Warsaw or Poznan, why Torun?

Beata is from Torun, so we had bought property here and have been investing in different activities for some time. I like a challenge having been involved in other ventures developing financial centres and other clusters elsewhere in the world. Torun ,the geographic epicentre of Europe according to some estimates,  is a remarkable city with an incredible history, and, I feel an even more interesting future… We started Mission ToRun as our contribution to helping build the Polish economy - it seemed a better idea than creating a pure NGO charity. Here we can use our business experience to help fuel growth.


What are some things that really surprise you about the ecosystem?

We have been let down by some rather unreliable folks who have arrived into the ecosystem recently. Their claims of wanting to help actually masked a desire to push everybody else out, whether through stifling debate, stealing speakers or copying ideas. However, imitation is the greatest form of flattery and despite their having considerable EU funds at their disposal, it is rather amusing to watch their relative inability to actually innovate - but then being a follower is easier than leading the ecosystem forward.


However, the best surprises have been positive - discovering great talent in various sectors including businesses and ideas with significant potential. We are proud to have the patronage of the Mayor of Torun amongst other recognitions of our work helping to create economic growth in the area.

Now our aims are to continue leveraging our experience and network of contacts to help add value to the startup community.

I understand you also do something called a business clinic. What is that?

The Mission ToRun Business Clinic is a simple methodology we have developed to complement our grassroots ethos. The Clinic takes place over an afternoon and is a chance to have a road test for an idea or for those with plans, or an operating business, to garner feedback with a series of experts in one on one sessions. To date clinics have taken place in our startup centre, Hanza Cafe, which also offers informal coworking space in the heart of the old city.

However, we have had so much interest in the Clinic process that we will be exporting the concept next year. I can’t say where yet but we have been approached by various cities and indeed one of the world’s most famous universities.

The Business Clinic works smoothly with the Mission ToRun philosophy of helping from the grassroots in a positive, “win win” fashion. Business is hard work but it doesn’t have to be an endless competition between relative ideas. We want everybody to succeed.

The Business Clinic concept has involved visitors from all over Poland (last weekend’s event included a great startup from Krakow) while on Hangouts we have had startups access our advisor/mentor pool from places as far afield as the UK, the Netherlands, Russia, Armenia and last weekend, Pakistan.


With the rise of Bitcoin, crypto-currency is a very hot topic right now, is it worth all the hype?

Yes. Bitcoin itself may prove to be the Model T Ford of cryptocurrency - i.e. the enabler which helped develop the infrastructure but was eventually outpaced by better designs. However the future for digital money is enormous. I have been discussing electronic currency even since before I featured it in my bestselling book, Capital Market Revolution! in 1999. That was long before the genius invention of the Blockchain but it was clear even then that electronic currency will be a key future component for trade and investment.

Or, to put it another way, Bitcoin is the cash equivalent to helio-centricity - the Copernican Revolution in money...

How did Mission ToRun get involved with the Fintech Fasttrack?

Having been involved in Fintech since long before it was trendy, in Europe, bi-coastally in the US, and in Asia, I have gained a fairly significant Rolodex driven from a lot of travel!

I know the StartUP BootCamp FinTech team through being a mentor on the programme and hence it made sense for Mission ToRun to co-promote the FastTrack event May 19th in Warsaw, where we have 10 slots for pitches and mentoring from a team including myself and several other knowledgeable players such as Jacek Adamski of Lewiatan Business Angels and Dermot Corr, the dynamic founder of TechSaturdays in Wroclaw. Last year, Friendly Score from Wroclaw made it to the Accelerator programme and I hope we can find another great Polish startup to get to London during the summer.

What is FastTrack looking for in a Fintech startup?

A good scaleable idea which can help create a solution to one of the many legacy problems in finance and help move digital markets forwards.


What will the winning startups get?

A place on an intensive accelerator programme in the heart of the City of London’s financial district, just beside the iconic Tower Bridge. It’s a great chance to meet a huge range of financiers, as investors and mentors as well as receiving 15000 Euros in cash, 3 months free office space and a vast quantity (450K Euros or more) of partner services... 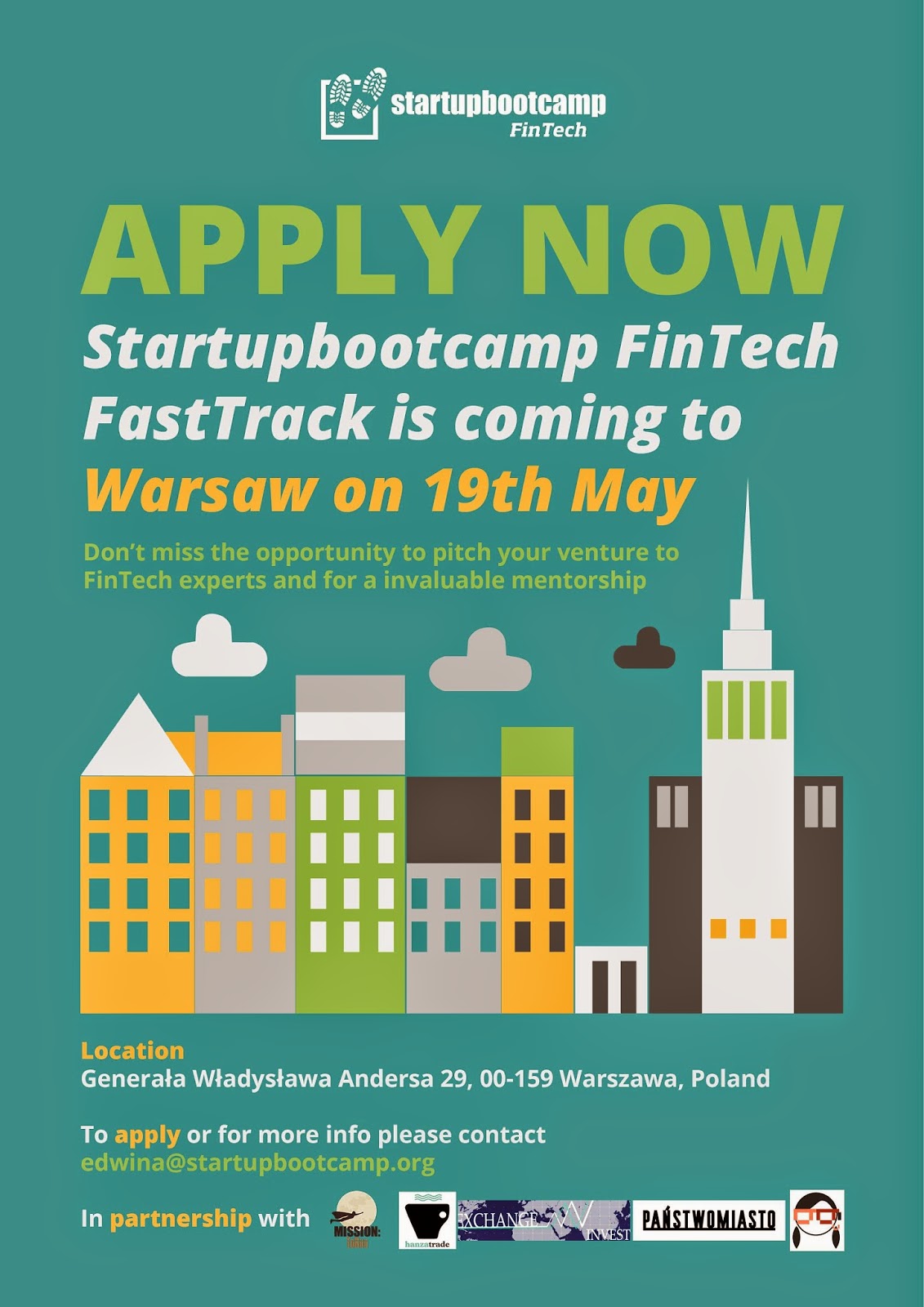 How does a startup apply?

More information including application forms can be found here: http://www.startupbootcamp.org/events/sbc-fintech-warsaw-fasttrack.html

Potential entrants are also welcome to contact us at Mission ToRun if they have any queries - we are Http://MissionToRun.org or you can find us via Facebook and Twitter.

Meanwhile, any startups in any sector can always get in touch about our Business Clinics and our regular monthly meetings, as well as other events. Our HQ is within Hanza Cafe, Piekary 28 in the heart of the old town.

Thank you Mr. Young for your time.  I would recommend our readers go to Torun and pay Mission ToRun a visit.

Thank you for reading another one of my posts written just for you!  If you liked what you read please share it by using one of the buttons up top and check out other posts in this blog.  I don’t want you to miss out on future posts so please follow me on Twitter @Eurodude23.  If you haven’t done it already, please like my fan page by clicking here!  See you next time!