American Chamber of Commerce is celebrating their 25th anniversary as an organization that seeks to make the ties between the United States and Poland ever tighter. They endeavour to communicate the message that US-Polish relations has never been better and that American companies are quite happy to invest and do business in Poland. As a reward for their efforts, 16 of their members has been honored with the recognition by the government of Poland for contributions to the development of the Polish economy by the Prime Minister and the Minister of Economy Janusz Piechociński.  Among the 16 are giants such as Google, IBM and Motorola.  An independent business, Lynka, was also among the honorees.

This morning at an American Chamber of Commerce in Poland organized reception, Krakow bid one of its most beloved diplomats farewell.  Ellen Germain has been the Consulate General at the Krakow branch of the American Consulate since August 22, 2012.  During the past three years, she has been a avid supporter of the Krakow Startup ecosystem and other ecosystems in the south of Poland.

Her goal was to strengthen the connections between the United States and Poland. During her tenure as Consulate General, the American Consulate has provided educational support and connected Krakow to the brilliant minds of Silicon Valley.

A major achievement was the Polish American Innovation Bridge conference at AGH University of Science and Technology. Professors and professionals from Stanford University, Akamai, Google, and Cisco gave the Krakow ecosystem some important pointers in growing their business. 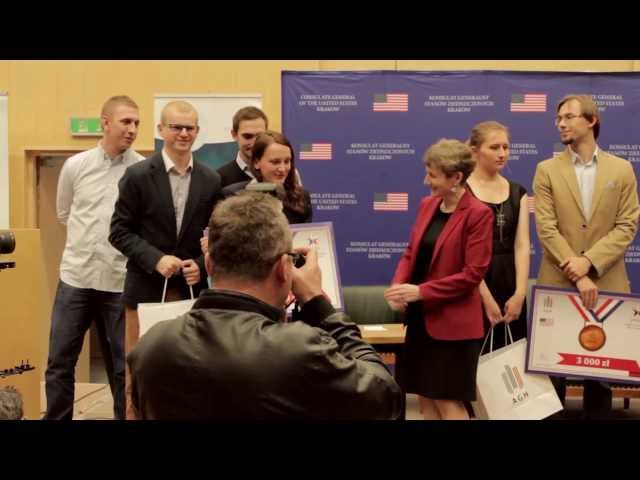 Ms. Germain has also attended many startup events such as Open your Mind to Astia.  There she shared her passion of computer science and American values with the attendees.  Ms. Germain was a computer programmer and a science journalist in her past life.  She also holds a CS degree from Cambridge University.

Joanna Bensz, Vice Chairman of AmCham, thanked Ms. Germain for her outstanding service to the various communities in Poland and she will be missed.  John Lynch second that praise and added his gratitude for Ms. Germain’s service to the United States’ mission in Poland as a flag carrier.

Ms. Germain told me that her interactions with the talented individuals of the Krakow startup community and other communities have been one of the highlights of her time in Krakow.  She encourages us to keep up the good work.

Ms. Germain, on the behalf of the Polish startup community, thank you for your enthusiastic support. We wish you the best in your future endeavours. Come back again sometimes, we’ll leave the light on for you.


Thank you for reading another one of my posts done just for you!  If you liked what you read please share it by using one of the buttons up top and check out other posts in this blog.  I don’t want you to miss out on future posts so please follow me on Twitter @Eurodude23.  If you haven’t done it already, please like my fan page by clicking here!  See you next time!
Posted by KSUP at 7:04 AM