Why Adblocking software is killing Ad revenue in Poland

There have been many articles in different publications about ad-blocking software and extensions. These software are killing revenue streams for advertisers as well as sites like Facebook and Google. Part of the reason that makes Google and Facebook so valuable is that fact that they have a broad reach. As a result, many businesses would like to use this reach to advertise their products and services. So you advertise on websites to get more customers.


However, in the past there were pay per click, then there is pay per view. You have pop-ups and banners as well as other hidden ways to get info about users. The Ad-tech is a very complicated game and the variations of ways to monetize it is mind boggling.

Then steps in the ad-blockers. With adverts that track your moves and capitalizing on your clicks and covering up valuable content, viewers can become frustrated. As a result, ad-blockers takes away this pain point. However, it takes money away from the publishing websites. Although adblocking is used by a small percent of internet users at around 181 million, but it will cost publishers close to $22 billion. That is huge. Many of those articles have pointed at Poland for the penetration of ad-blocking software and extensions into the internet market. In Poland over 35% of internet users have installed ad-blocking software. And the trend is showing a steady positive slope.  So why has Poland been so rampant with the installation of ad-blocking software? 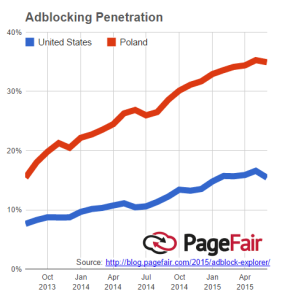 In the past, adverts on popular Polish websites were out of control. Website visitors were overwhelmed by tons of pop-ups and sliders. And every white space on the website were just painted with adverts. It was just annoying. These websites have calmed down with their adverts and now the websites looks at least respectable. Some of the ad-blocking were used to counter the superfluous use of pop-ups and sliders. 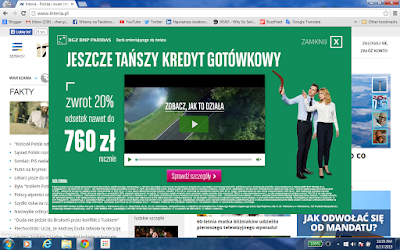 Between 2007 and 2012 amount of ad spending went from 180K Euros to 520k Euros. One of the most popular ways the Poles use internet is for streaming music and video. Video is very popular in Poland. Between 2007 to 2012 the number of streaming video users went from 1.4 million to 14.6 million which represents a 1,000 percent rise. Poles are big fans of international hits like Mad Men, Sherlock, and Game of Thrones. There aren’t many quality streaming services like Amazon, Hulu, or Netflix on the Polish market. So where do they go, the illegal streaming sites. And like your favorite free porn site, they are also filled with trackers and pop-ups as well as ads that hide the window closing (X). As a result, the ad-blockers are very useful here. However, as in many wars, there are innocent victims. People tend to keep their ad-blockers running so innocent websites like Google and other publishers become casualties in this ad-war. This would be a good argument for services like Amazon and Netflix to get onto the Polish market. 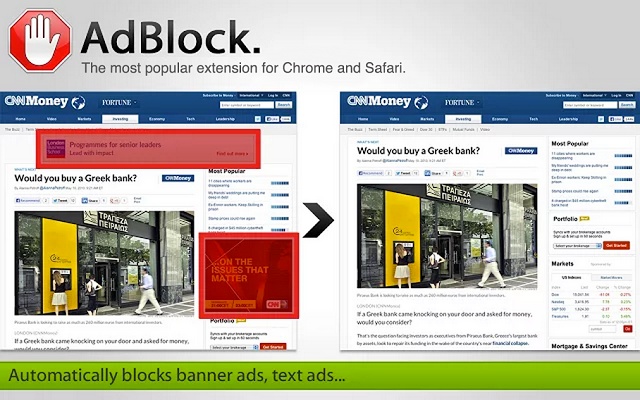 As with other markets in the world, pirating content has cost the music and movie industry billions of dollars. The CEE region is no different. People in countries like Poland and Czech Republic pretty much know that the way you get music and movies online is through pirating. In fact back in 2012 there were massive anti-ACTA and anti-SOPA protestsin Poland. That said, there are still lots of users who get their content the legal way. Music streaming is also very popular and on the rise. According to early 2014 numbers legal streaming services recorded a 61 percent year-on-year increase of subscriptions in that period. In terms of value, sales through streaming grew by 61.3 percent and amounted to 6.8 million zloty (1.6 million euro). Another growing segment was advertising on music sites, which amounted to 8.5 million zloty (2 million euro) in H1 2014, 21.7 percent more than a year before. However, unlike video, graphic and text based content, you have to sit through the adverts on these sites, unless you can somehow “Tivo” these commercials.

Thank you for reading another one of my posts done just for you!  If you liked what you read please share it by using one of the buttons up top and check out other posts in this blog.  I don’t want you to miss out on future posts so please follow me on Twitter @Eurodude23.  If you haven’t done it already, please like my Facebook fan page by clicking here!  And if you like the content you have read, and are looking for a content writer for your team please go to www.contentfarm.org for details. See you next time!
Posted by KSUP at 1:58 PM